Our isolators employ a diamond support disc that channels heat from the resistive layer in the cone to the metal waveguide block and thus they can handle greater reverse power levels. To our knowledge no other commercial isolators offer this advantage.

At the heart of a Faraday rotation isolator are a pair of alumina cones and a cylindrical ferrite core. The cones are used to couple EM fields from the waveguides to the ferrite. The cones are bisected by a resistive layer along their central axis. In most commercial Faraday rotation isolators (“legacy isolators”), the ferrite and cones are suspended by a pair of washer-shaped supports as shown in the left side of the sketch to the right. The cone/ferrite assembly is inserted through the inner holes in the supports and then attached with a non-conductive epoxy. The support washers are made from a material having a low dielectric constant and low loss at mm-wave frequencies. Materials with these characteristics are generally in the class of thermal insulators and thus the cones and ferrite are thermally isolated from the metal block.

A signal entering the output port of the isolator is absorbed in the resistive layer bisecting the input cone and the signal power is converted to heat energy. Very little of this heat energy can be channeled away by thermal conduction through the washer shaped supports, rather it must be dissipated through a radiative process or by means of convection through the surrounding air. The resistive layers are thus subject to high heat levels and even damage if too much reverse power is incident on the device. Historically this was not an issue as there was very little power available at these frequencies. But as higher power sources are becoming available there is a renewed interest in the power ratings of these devices.

At Micro Harmonics we replaced the input support washer with a uniform optical-grade CVD diamond disc as shown in the right side of the above graphic. Diamond is the ultimate thermal conductor approaching 2200 W/mK, more than five times higher than copper. The diamond disc is sandwiched between the base of the input cone and the ferrite. The diamond disc is in intimate contact over the entire area of the cone base. This is the optimal location for the diamond disc since it is the region subject to the highest heat levels. 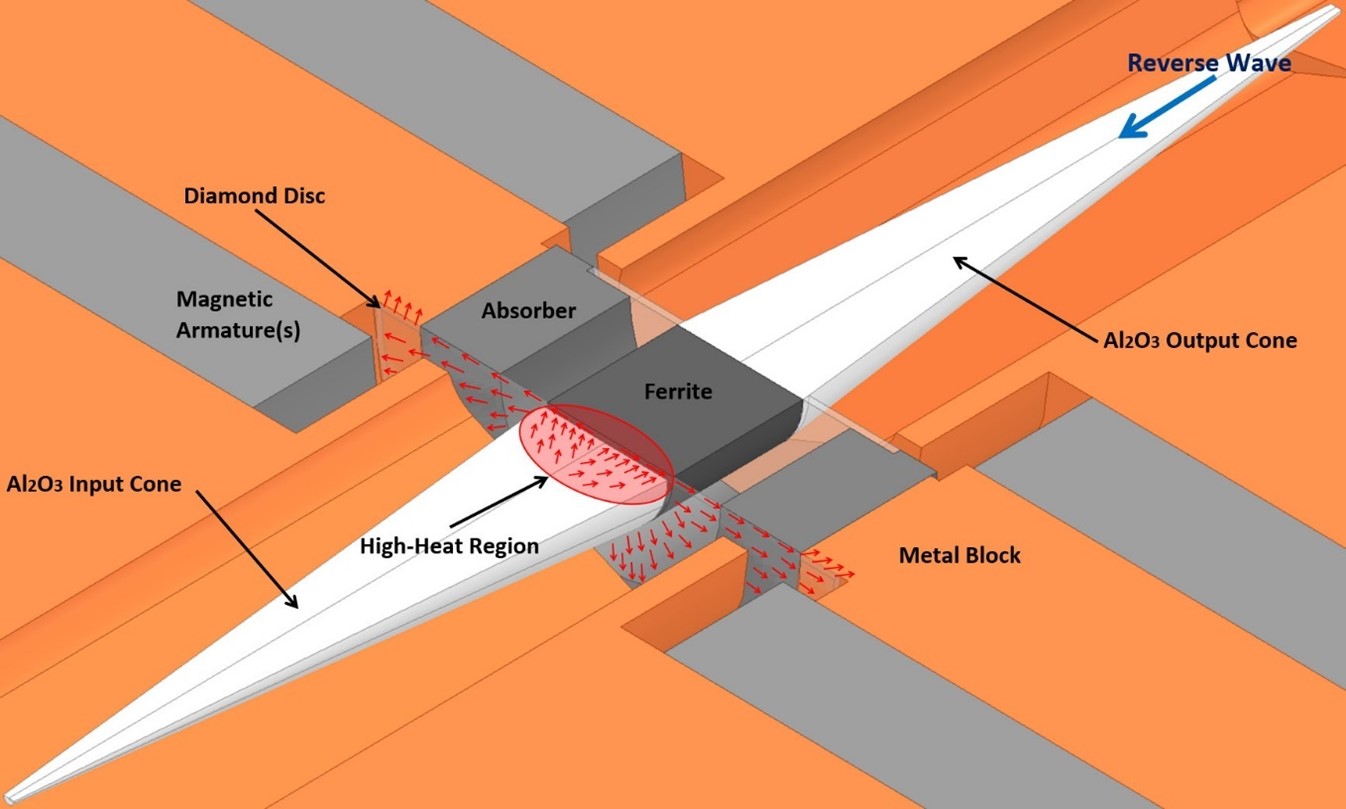 The graphic to the right shows a split view of the Micro Harmonics isolator. The diamond disc is epoxied to the metal waveguide block over its entire periphery and provides a path to channel heat away from the resistive layer. The red arrows indicate the path of heat flow.

How effective is the diamond disc? In the graph below we show data from thermal simulations of two WR-10 isolators: a Micro Harmonics isolator with a diamond disc and a “legacy” isolator with washer shaped thermally insulating supports. The rated power handling for the legacy isolator is 1 W. At that power level the maximum temperature in the legacy isolator is 50°C (near the base of the cone). The power required to achieve a 50°C maximum temperature in the Micro Harmonics isolator is 7 W. At lower power levels, our isolators consistently run cooler which translates into improved reliability and longer component lifetimes. 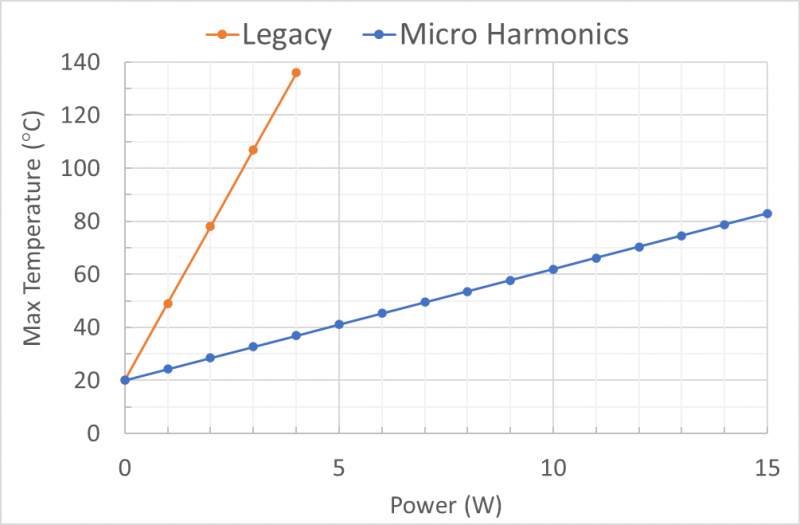