Voltage variable attenuators (VVA) find wide application in many microwave and millimeter-wave systems. At frequencies above 50 GHz, most VVA’s are either based on PIN diodes or resistive vanes with motor driven mechanical actuators. Many PIN diode VVA’s offer only partial waveguide band coverage (10 GHz at WR-10) with maximum power near 100 mW. Transistor chip attenuators are available to 100 GHz, but the maximum power rating is only 30 mW. The chip must be mounted to a circuit and integrated into waveguide. 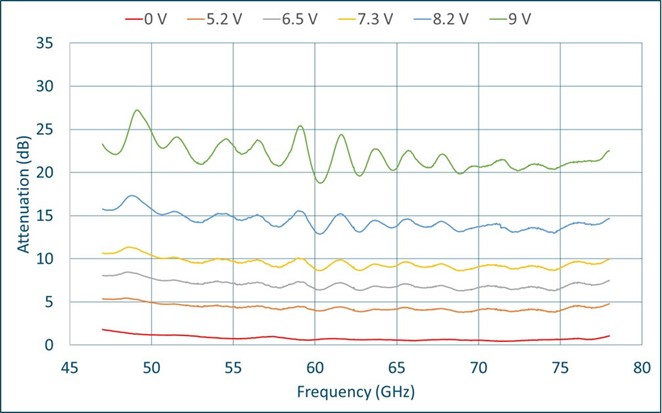 At Micro Harmonics we have developed a line of voltage variable attenuators based on the physics of Faraday rotation. Our VVA design uses a magnetic coil to produce a variable magnetic bias field in a ferrite rod. The VVA is similar in many respects to our Faraday rotation isolators. Using this approach, we have produced VVA’s in WR-15, WR‑12, and WR-10 with full waveguide band operation and relatively high-power handling as compared to other technologies. These VVAs are compact, lightweight, and are insensitive to damage from electrostatic discharge.

The measured performance of our WR-15 VVA is shown in the graph below. The attenuation is relatively flat up to about 20 dB. Attenuation increases with voltage in this configuration.

Our attenuator can also be configured so that maximum attenuation is achieved at 0 V bias. Our simulations indicate that the attenuator gives better performance in this configuration. The dynamic range is improved to more than 40 dB. The attenuation at 40 dB is relatively flat across an extended waveguide band. In the graph we show simulation data over the extended band from 70-115 GHz (the standard WR-10 band is 75-110 GHz). The attenuator uses diamond heatsink technology and has a power rating in WR-10 of 2.3 W CW. We are currently building prototypes to validate the simulation data. PIN diode attenuators have faster switching speeds, but our attenuator has a flatter response, higher power handling, higher dynamic range, and broader bandwidth. 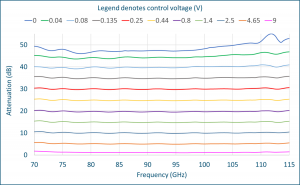 The photograph to the left shows our WR-10 attenuator. The attenuator is compact with the main body measuring only 0.75 x 0.75 x 1.2 inch (19 x 19 x 30 mm). The small size makes the attenuator very easy to fit into millimeter-wave systems. A DC control voltage is applied through an SMP connector. The switching speed is estimated to be a few kilohertz due to the relatively large inductance of the magnetic bias coil.