Our millimeter wave Faraday rotation isolators are the best choice to suppress standing waves in your systems. They have the lowest insertion loss in the industry and are the perfect choice for sensitive millimeter wave instrumentation. Our millimeter wave isolators employ unique diamond heat spreaders for cooler operating temperatures and improved power handling. They are 100% made in the USA and can be sole-sourced in US government acquisitions.

The following information pertains to the millimeter wave isolator catalog listed below. Please click the individual product links below for detailed spec sheets. 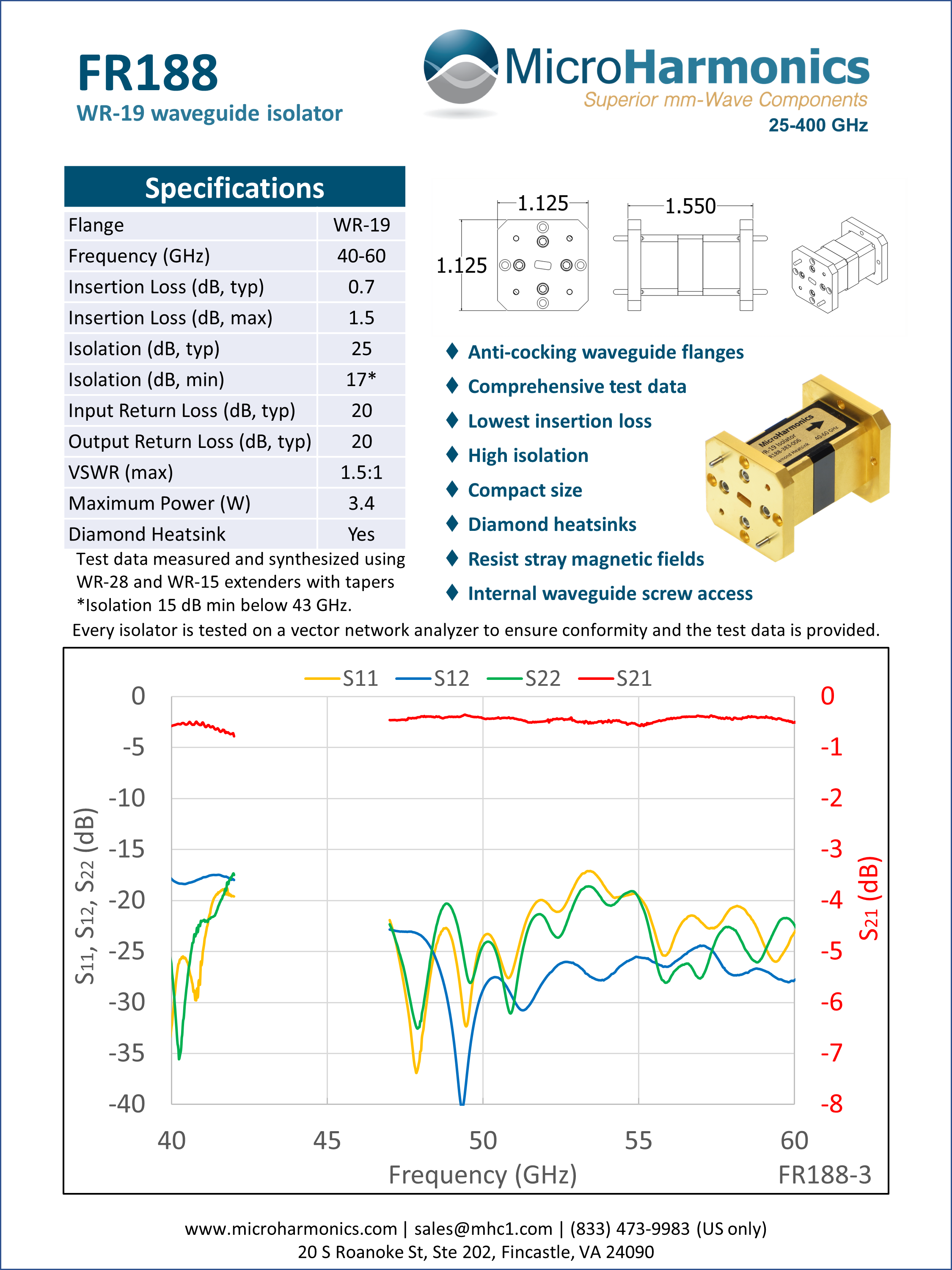 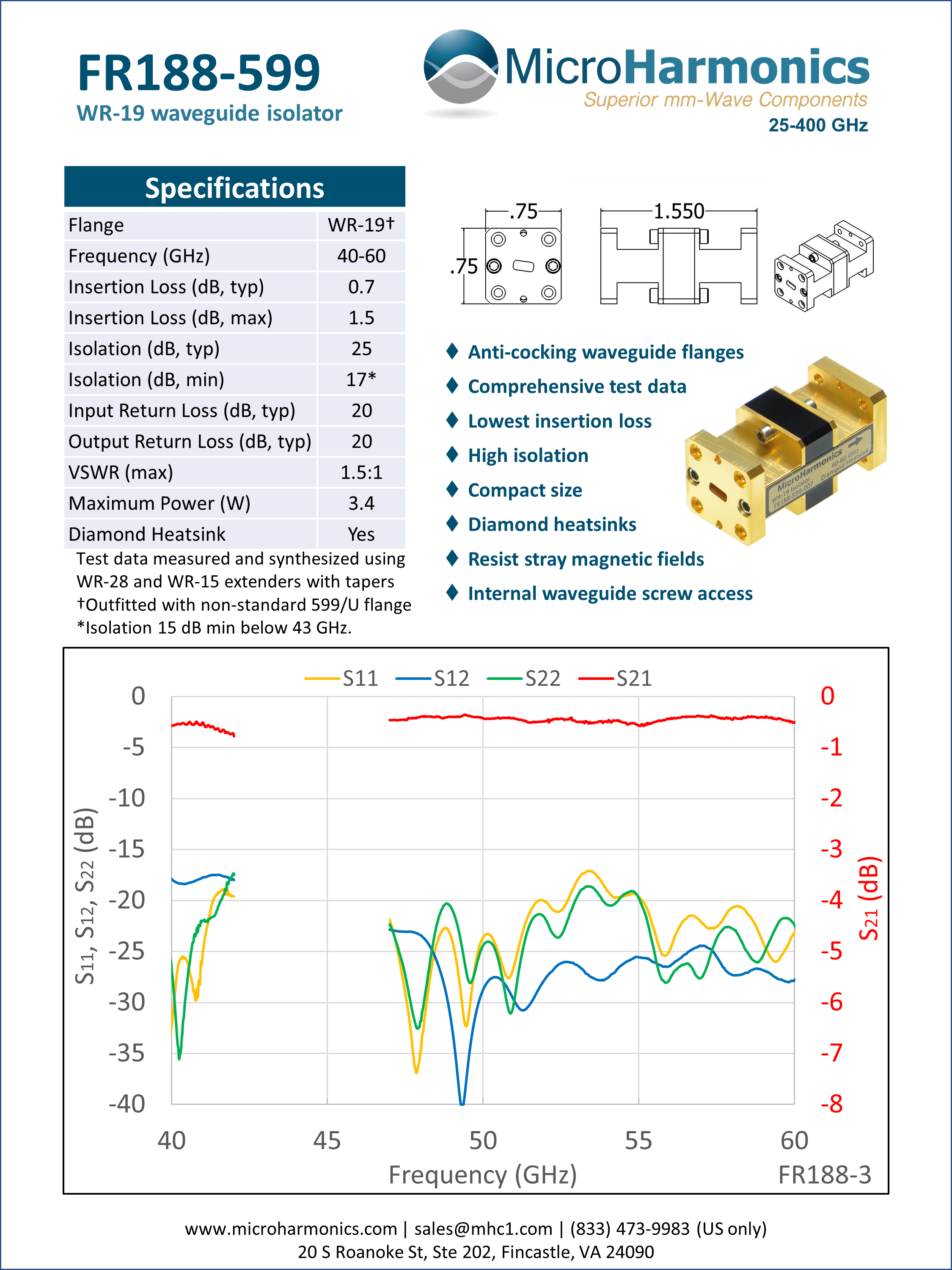 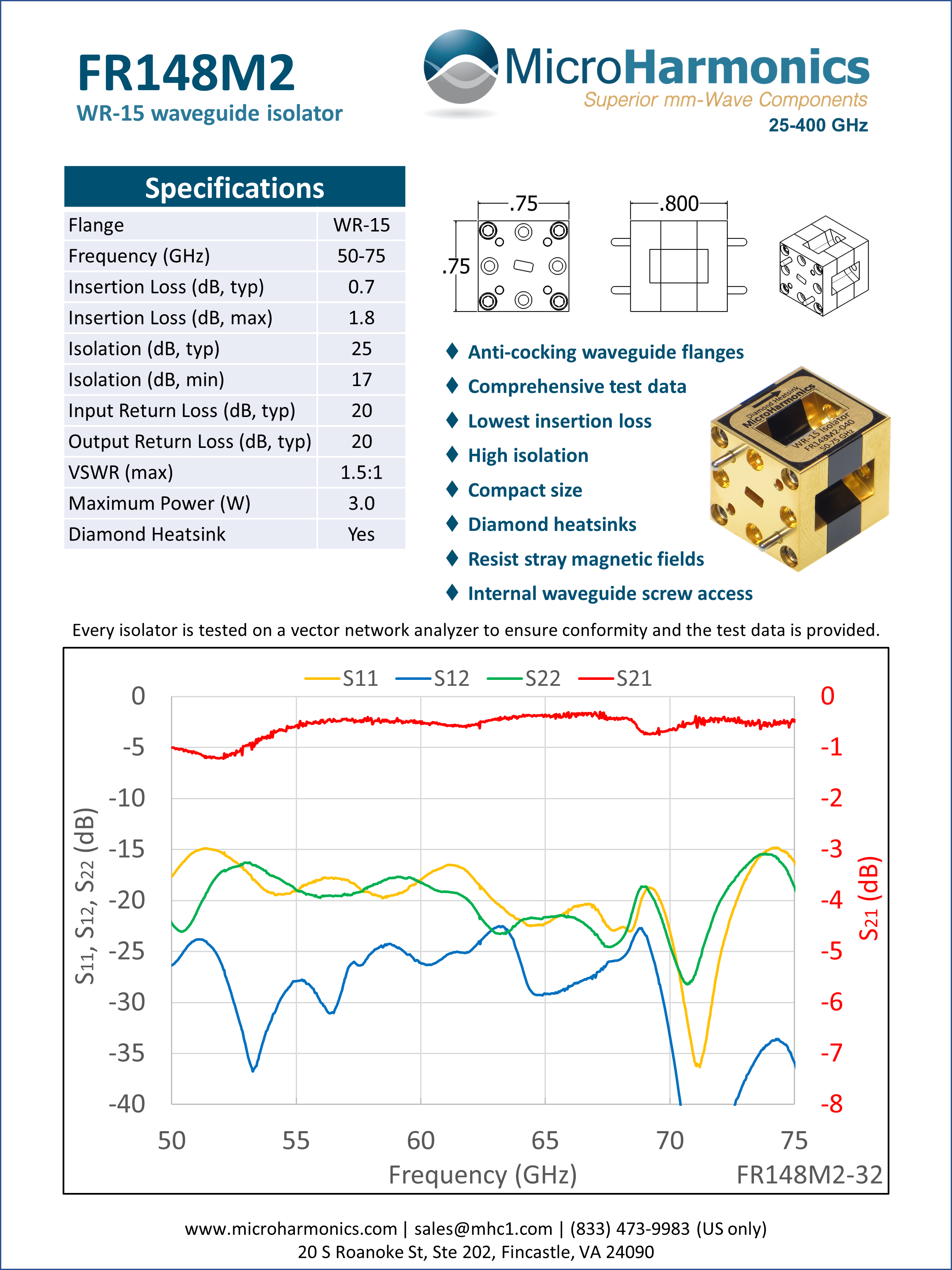 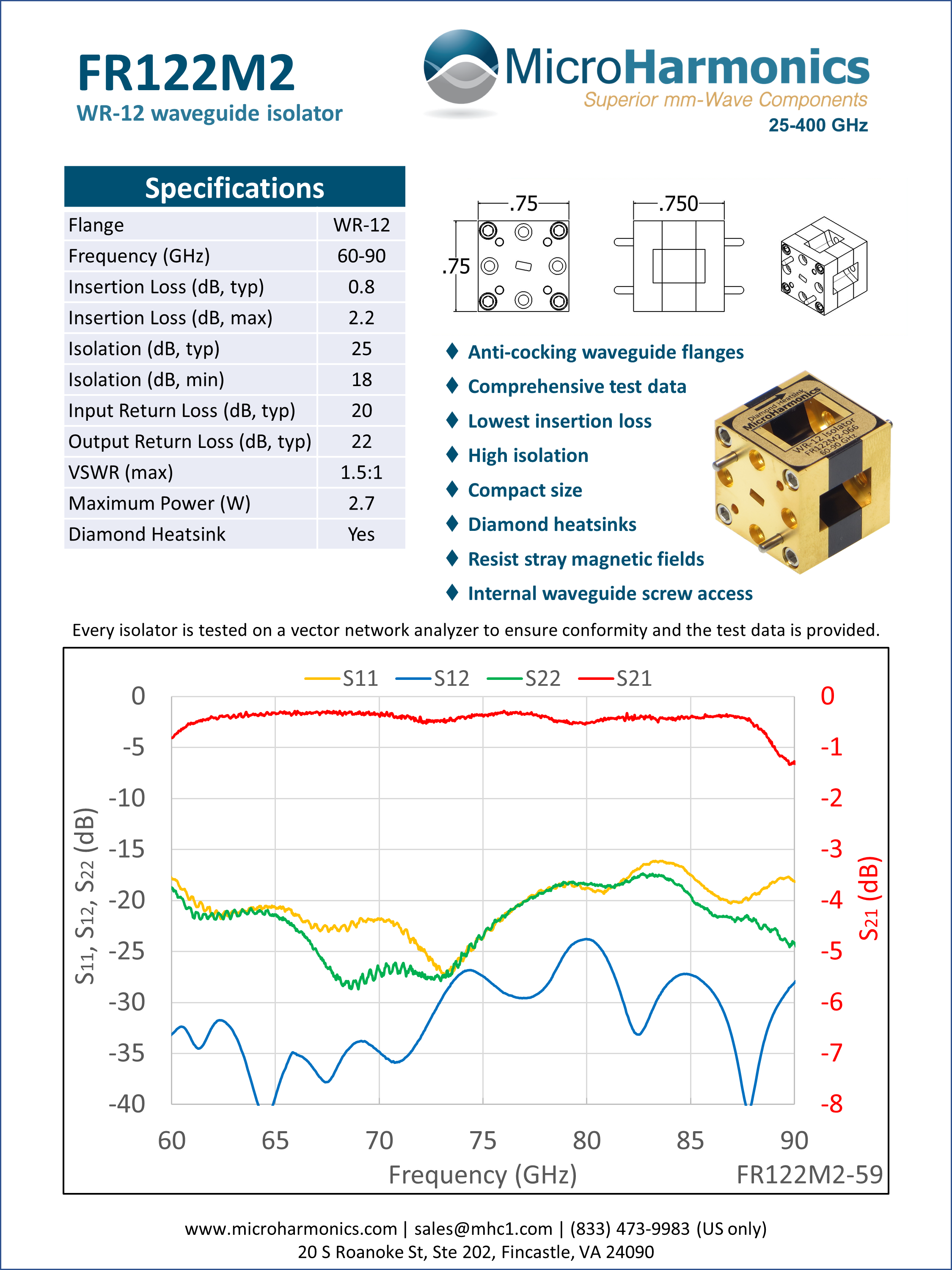 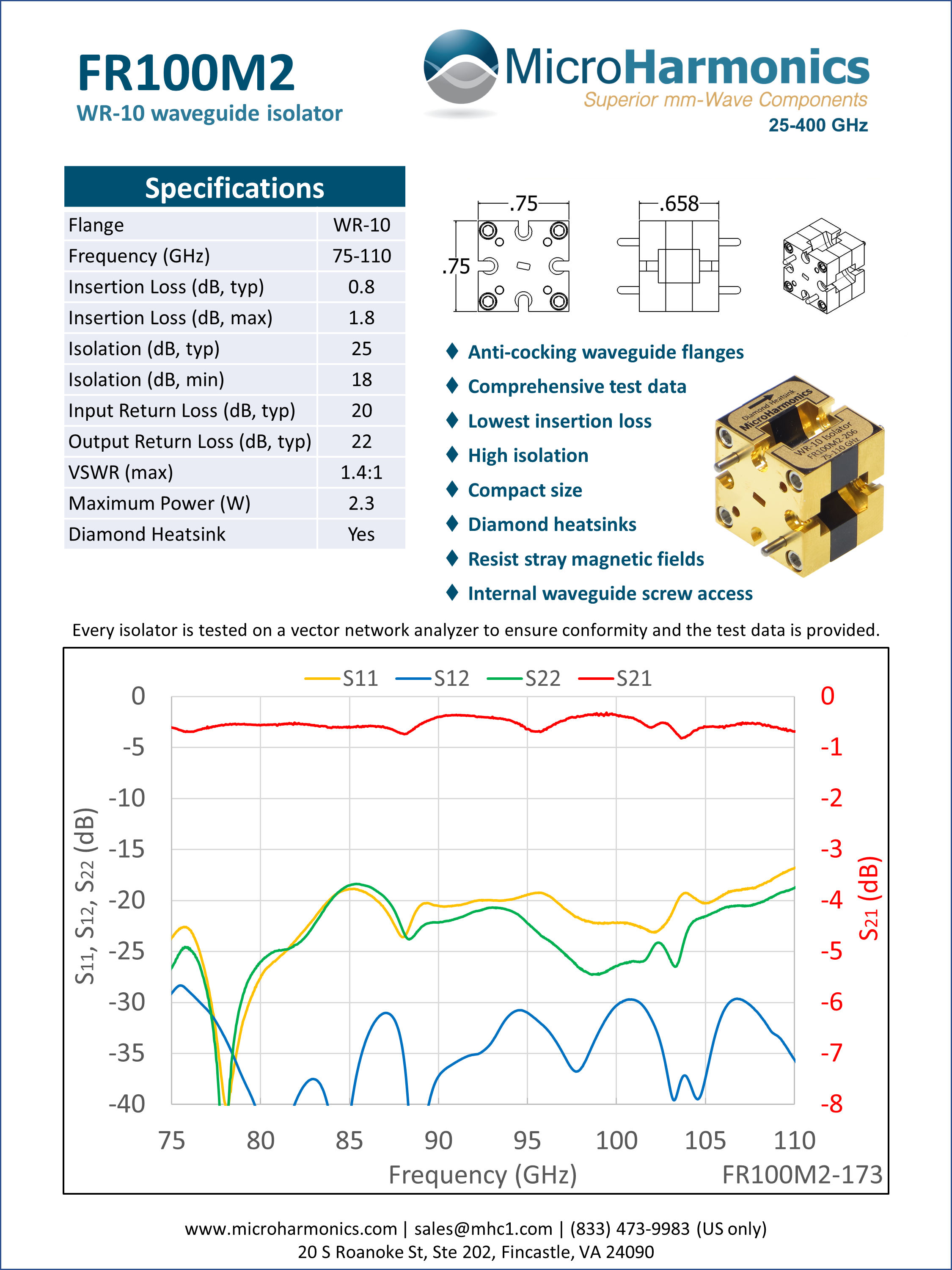 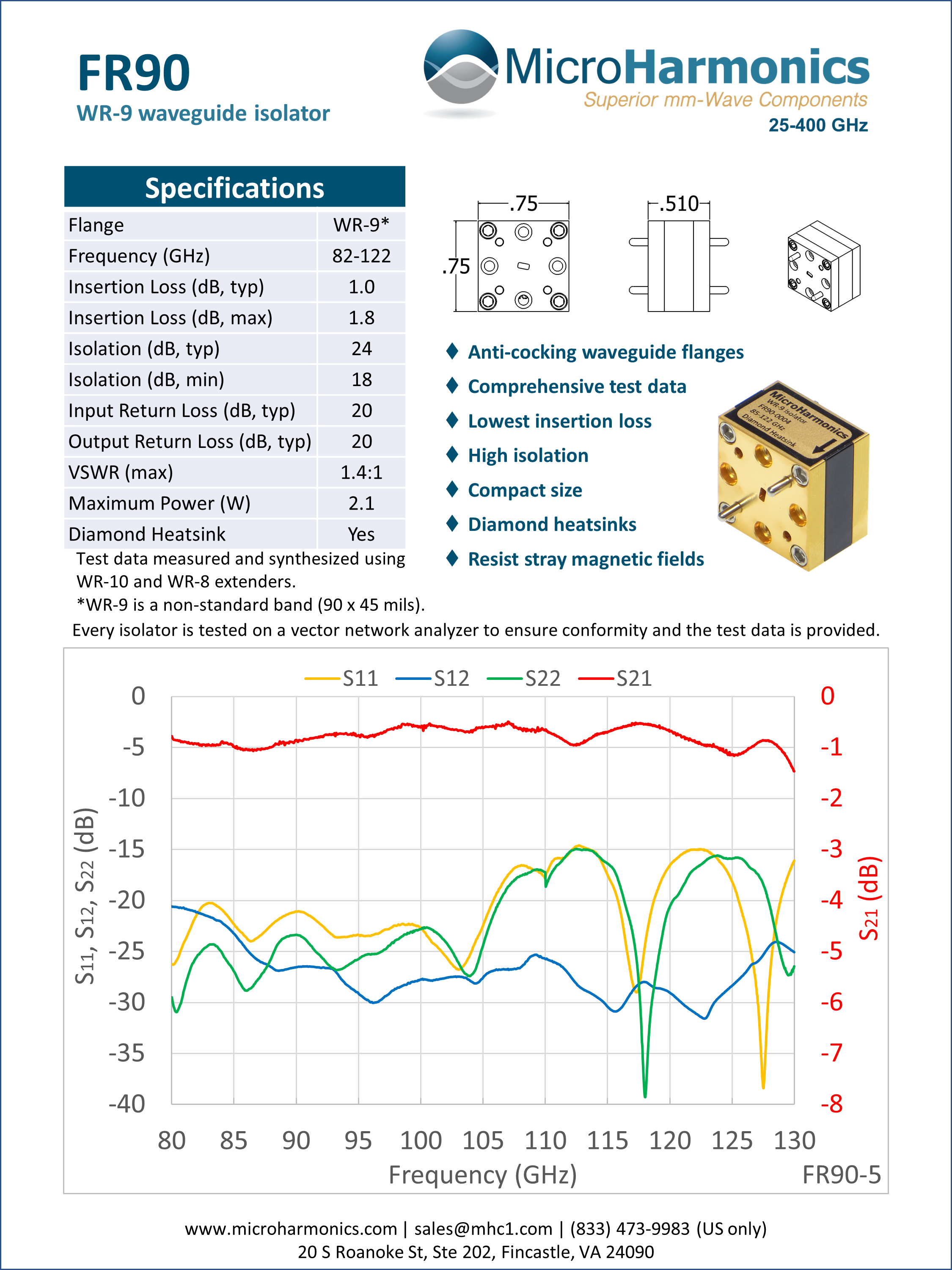 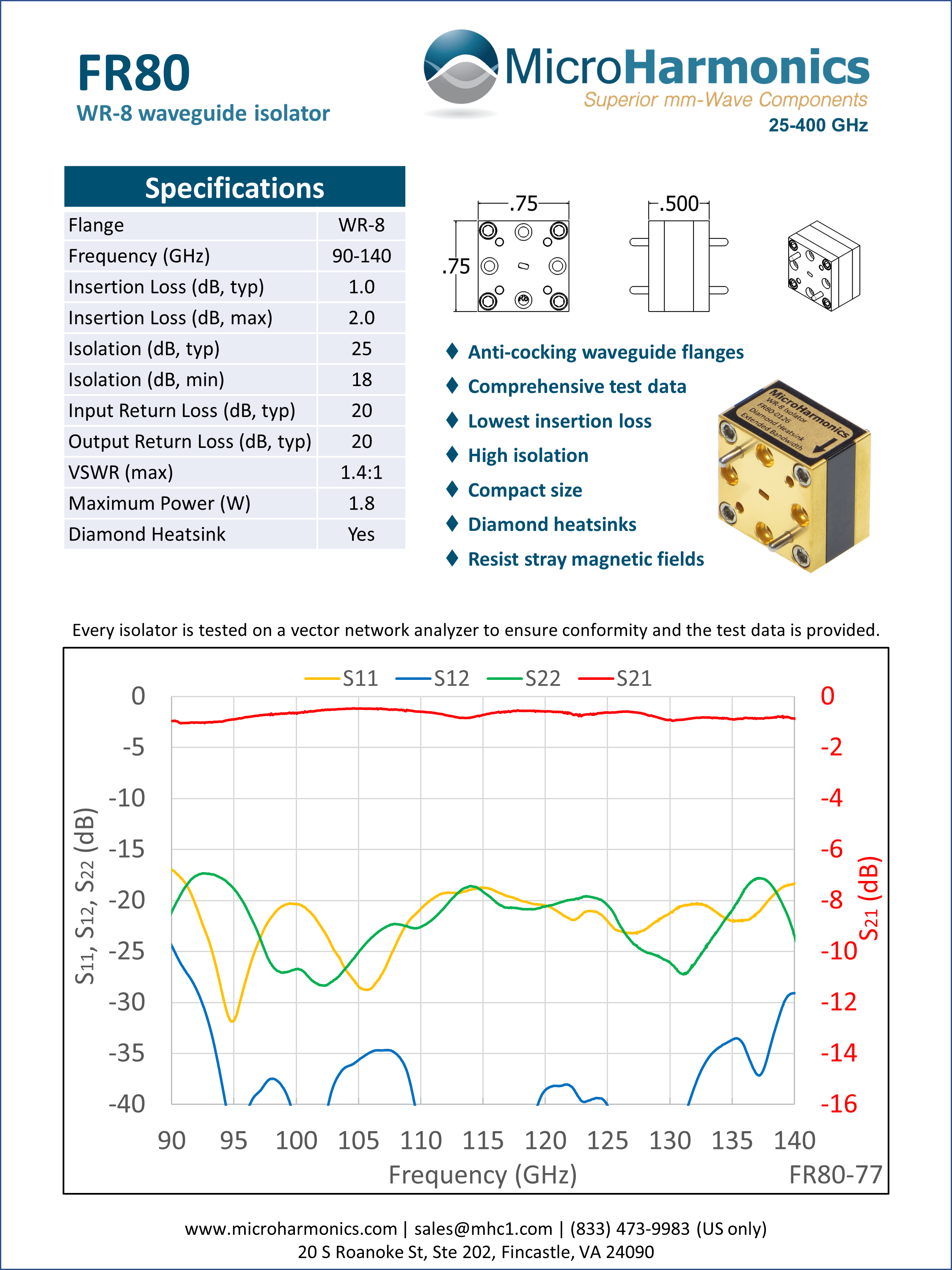 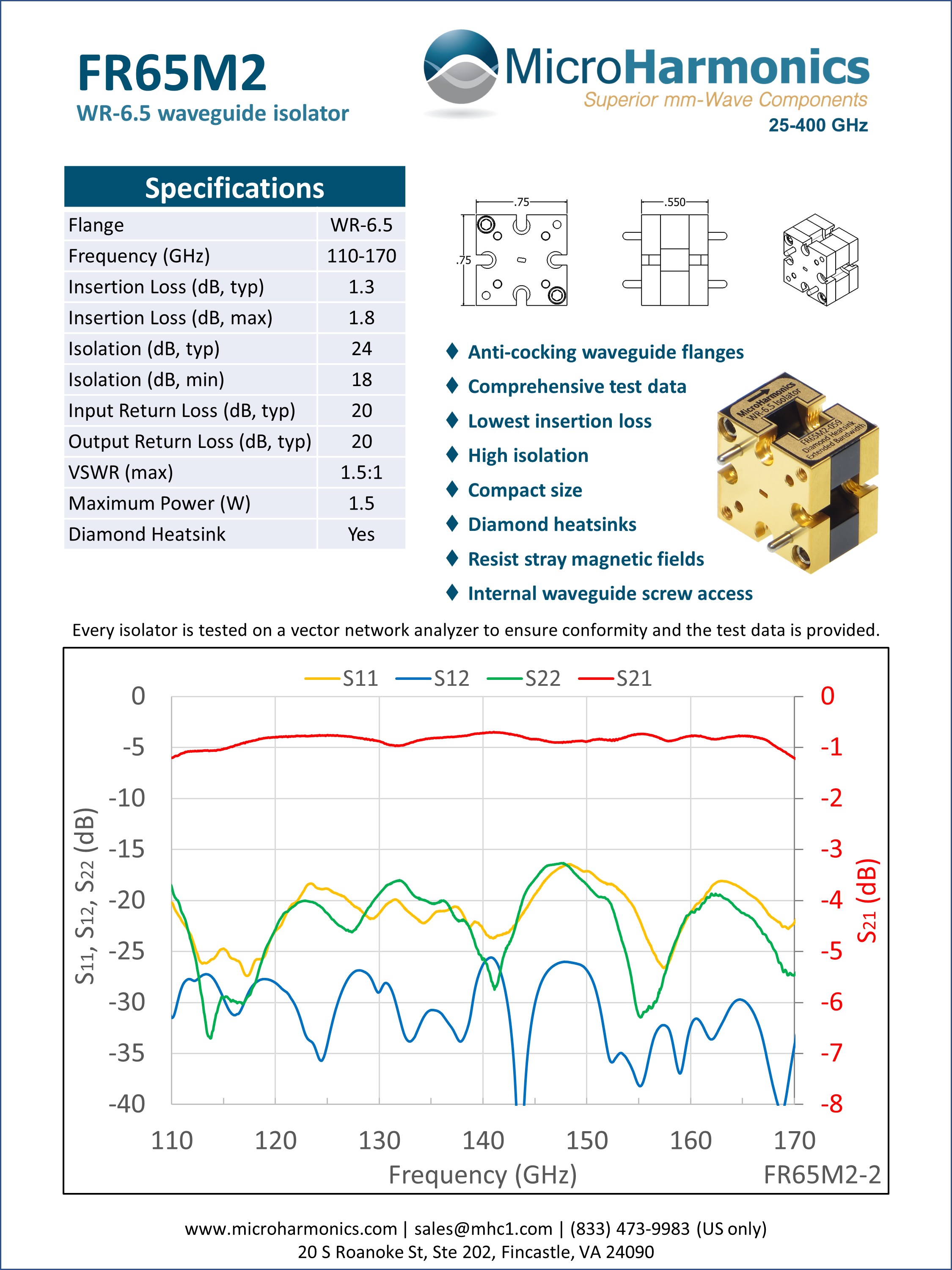 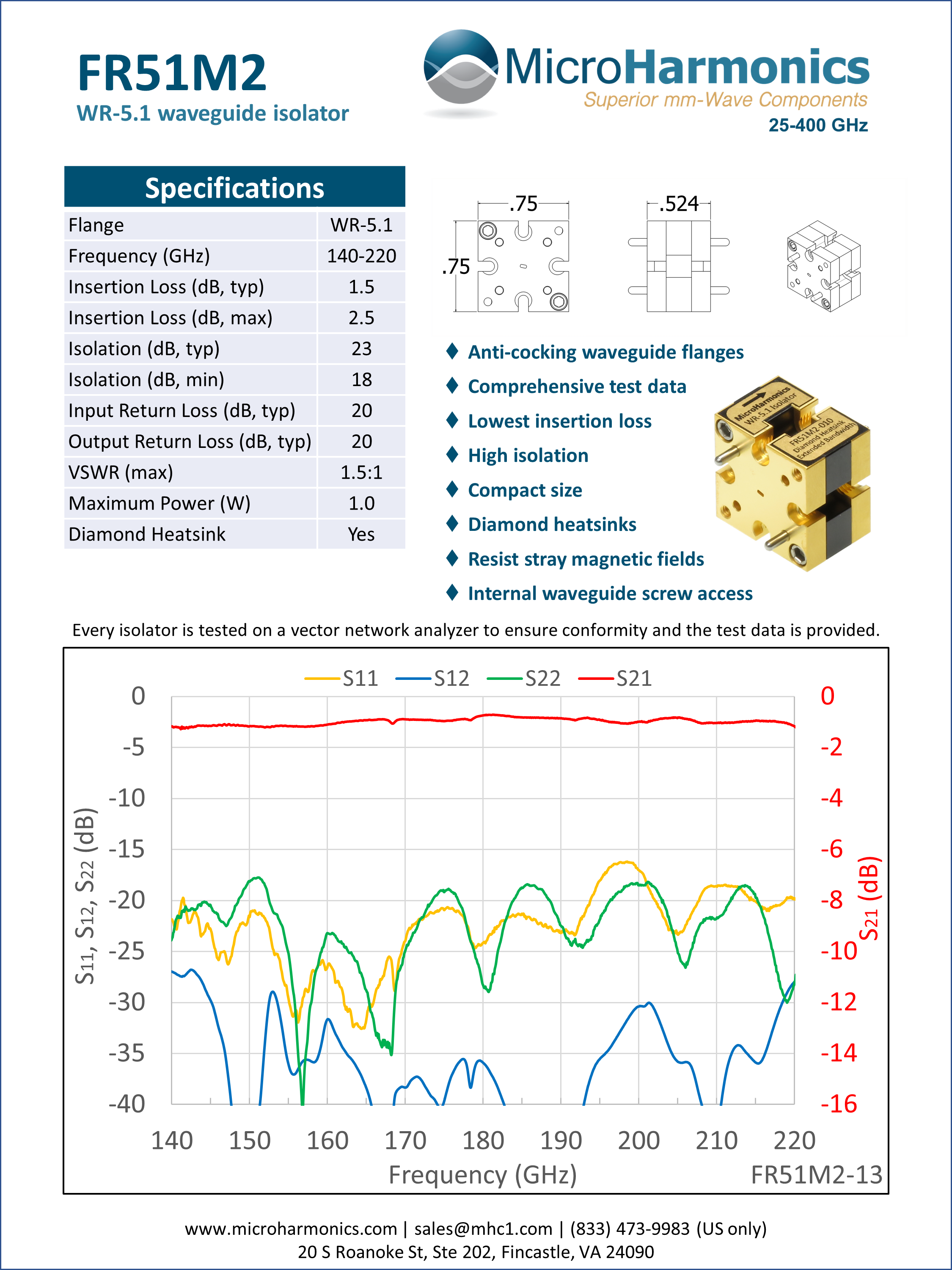 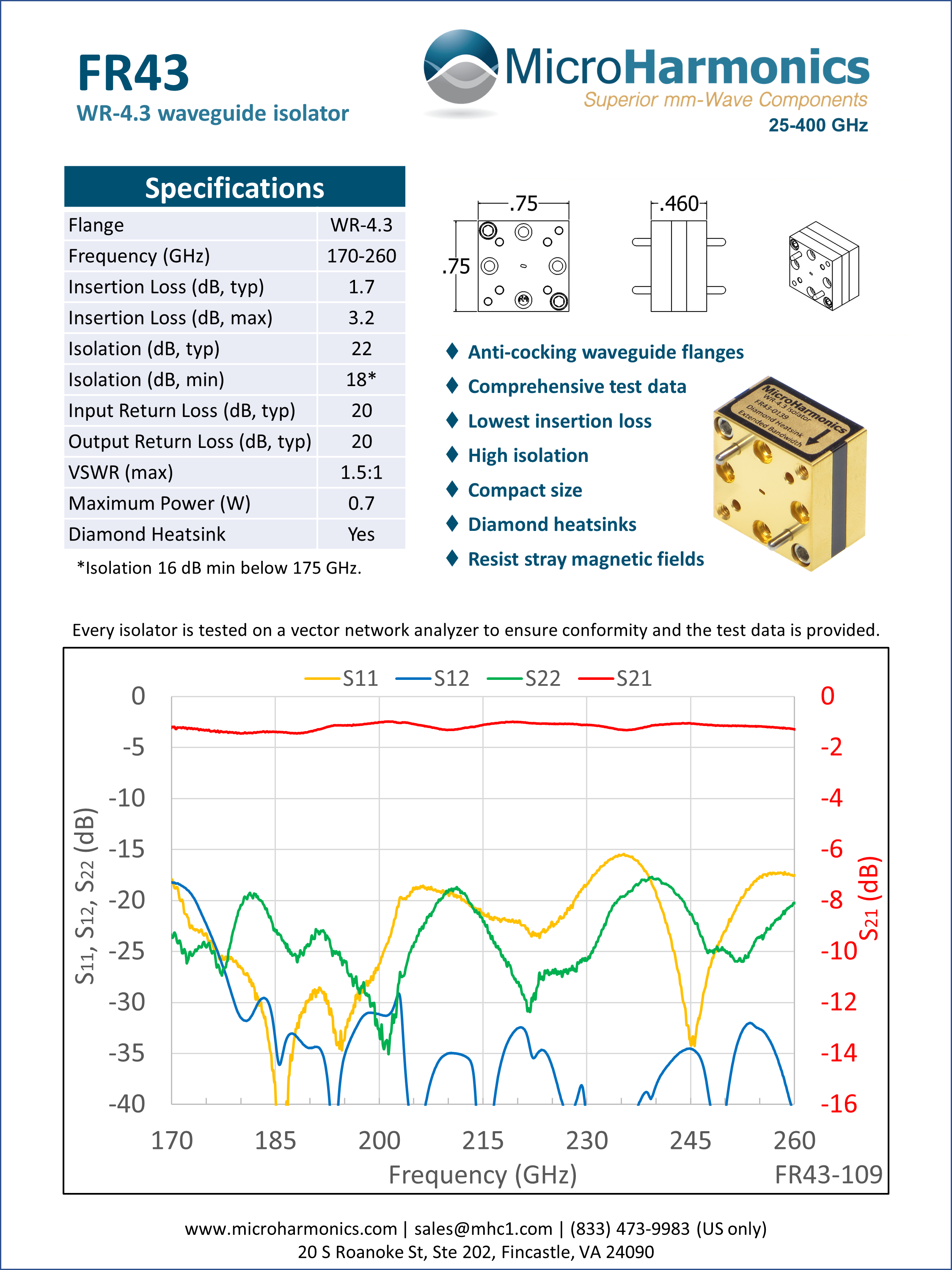 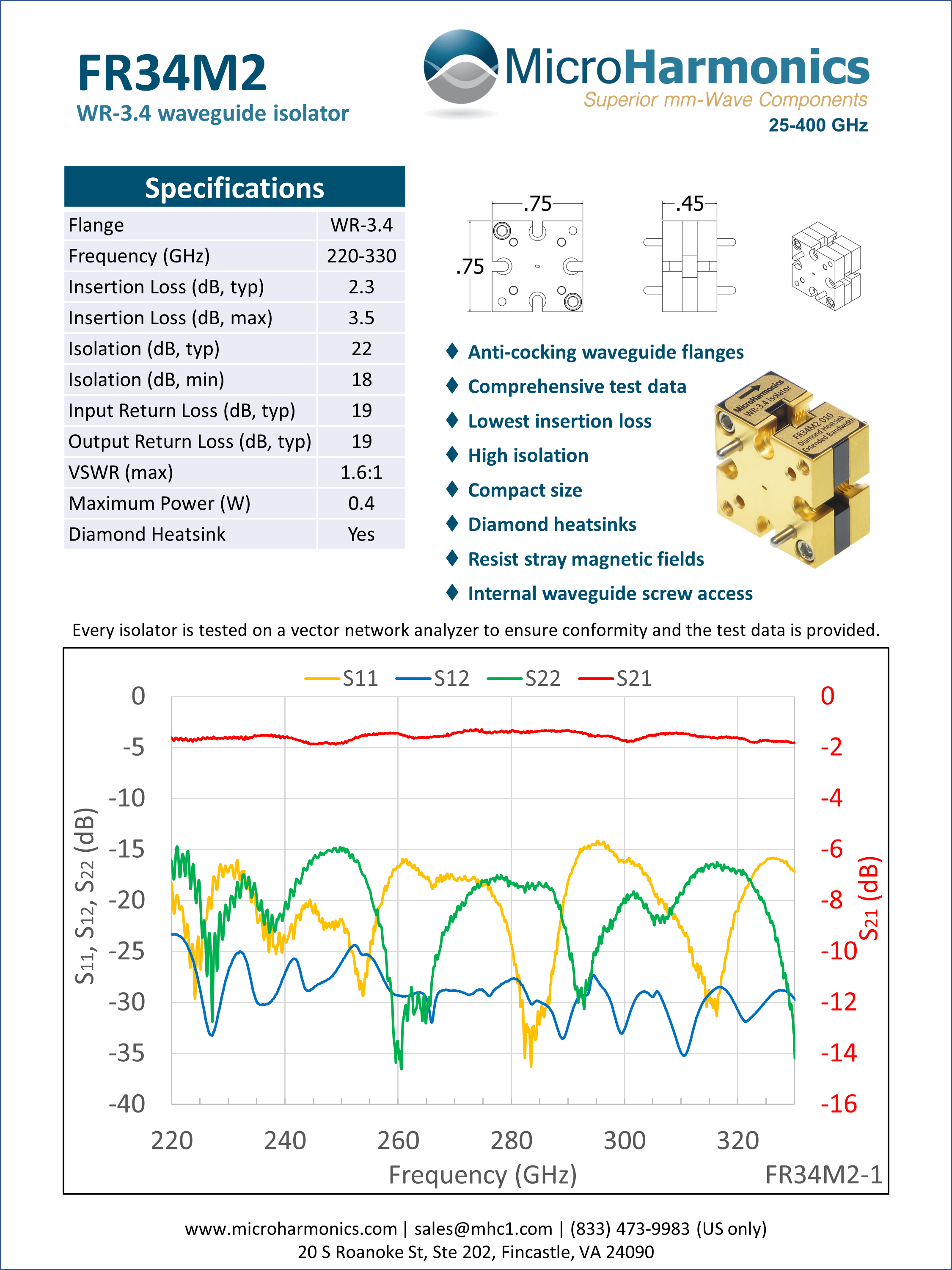 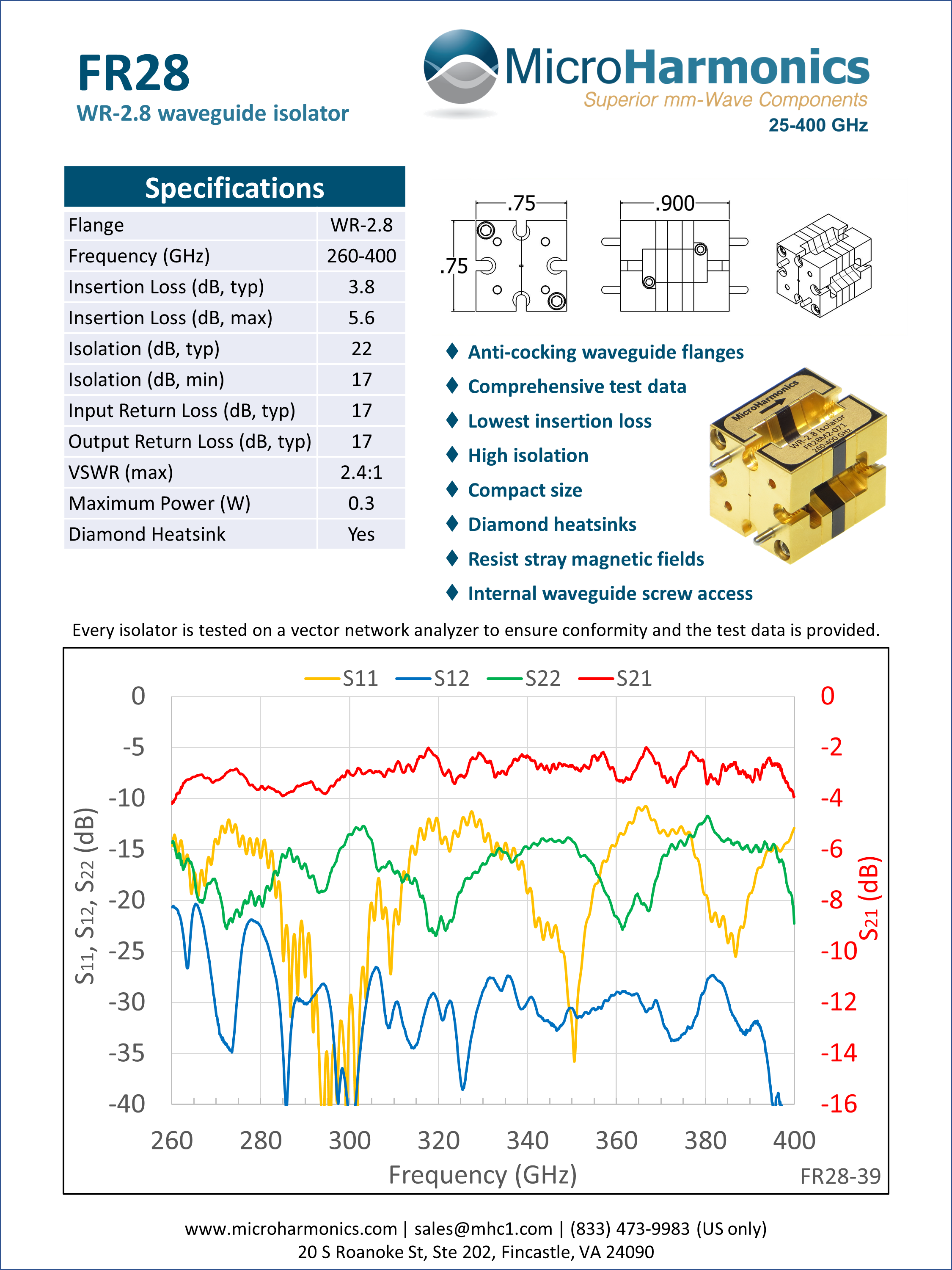 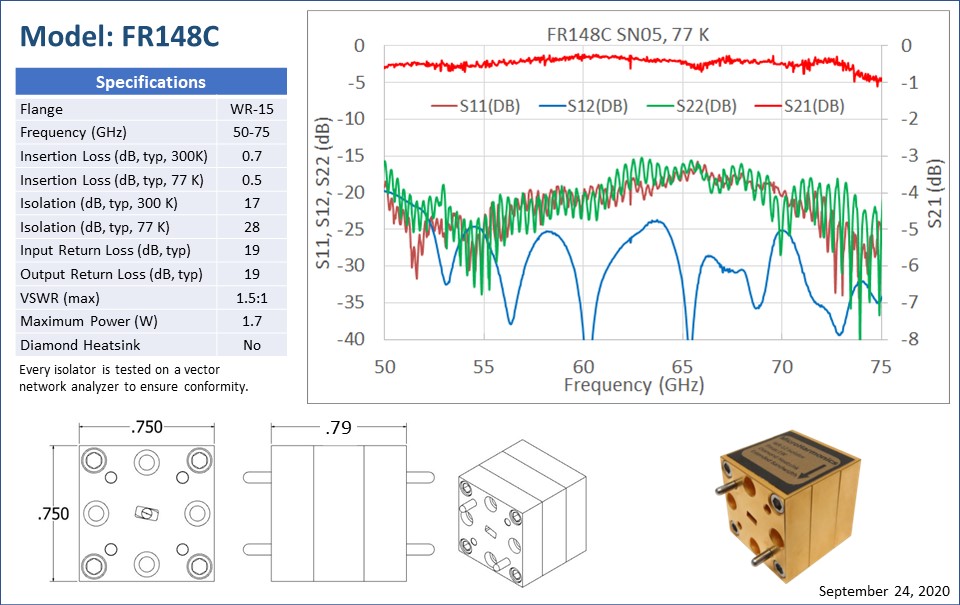 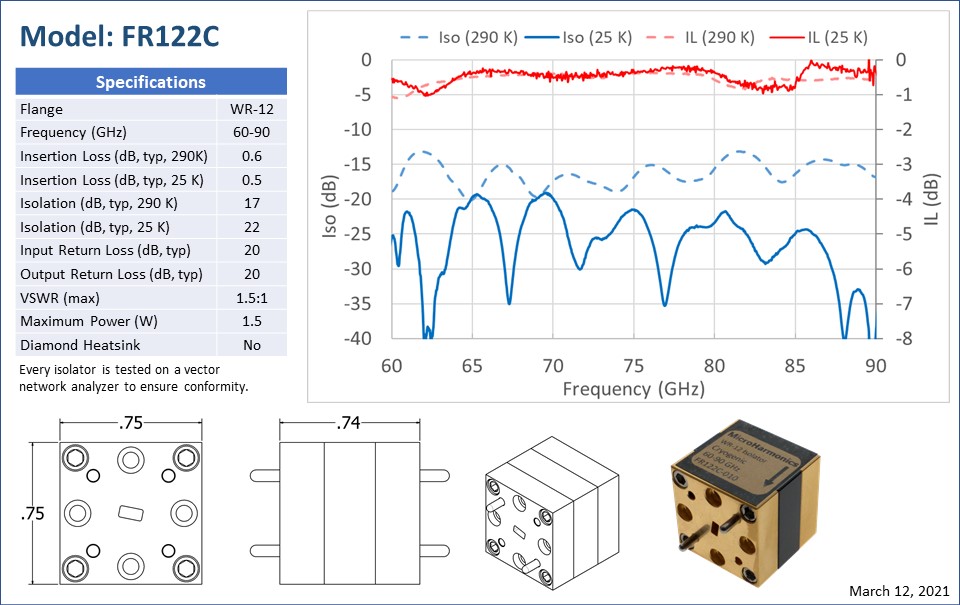 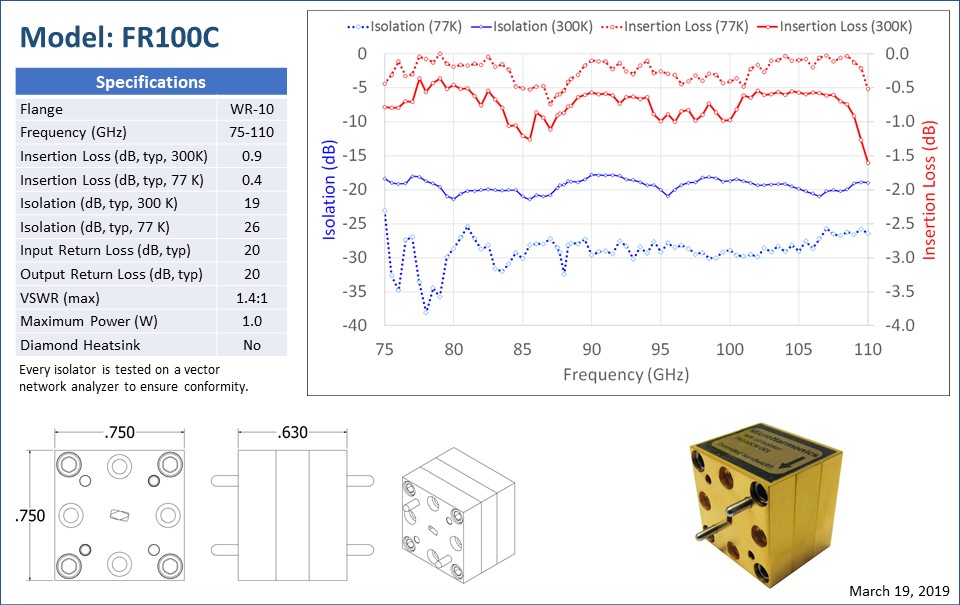 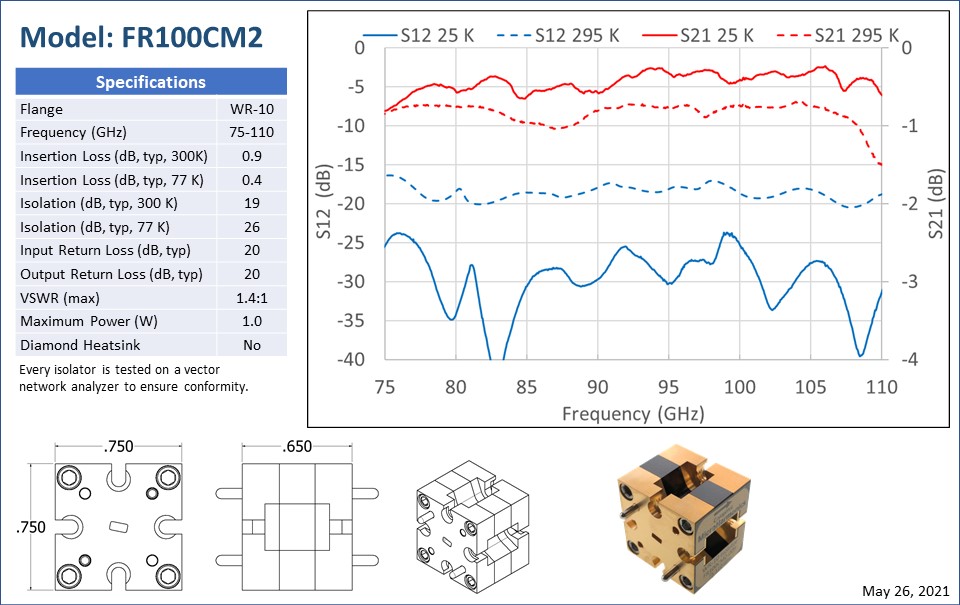 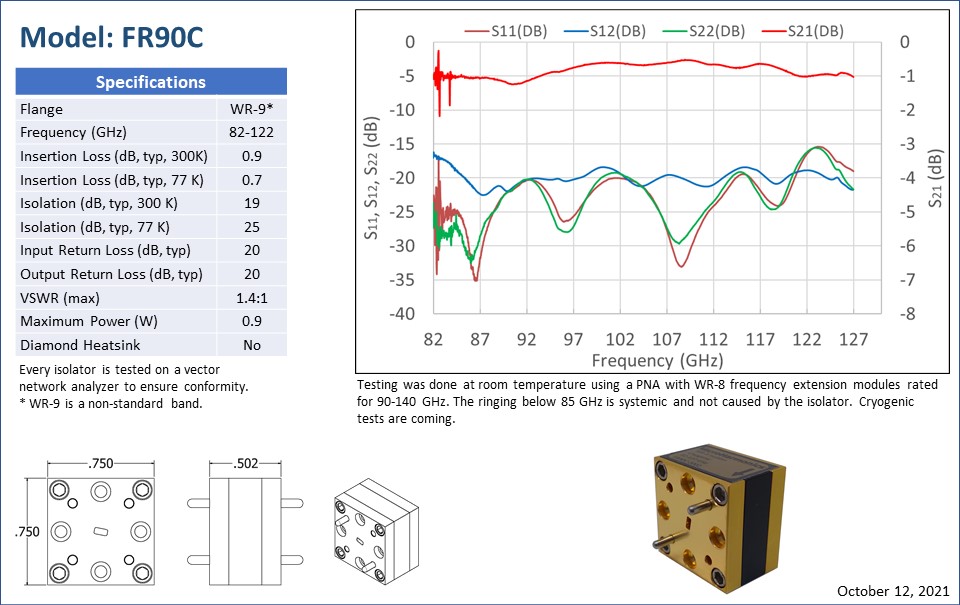 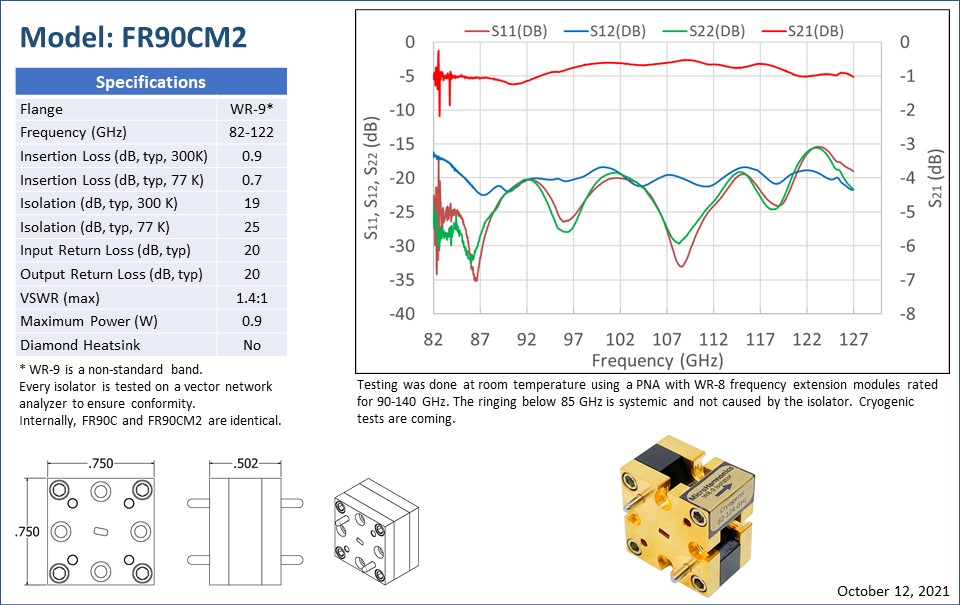 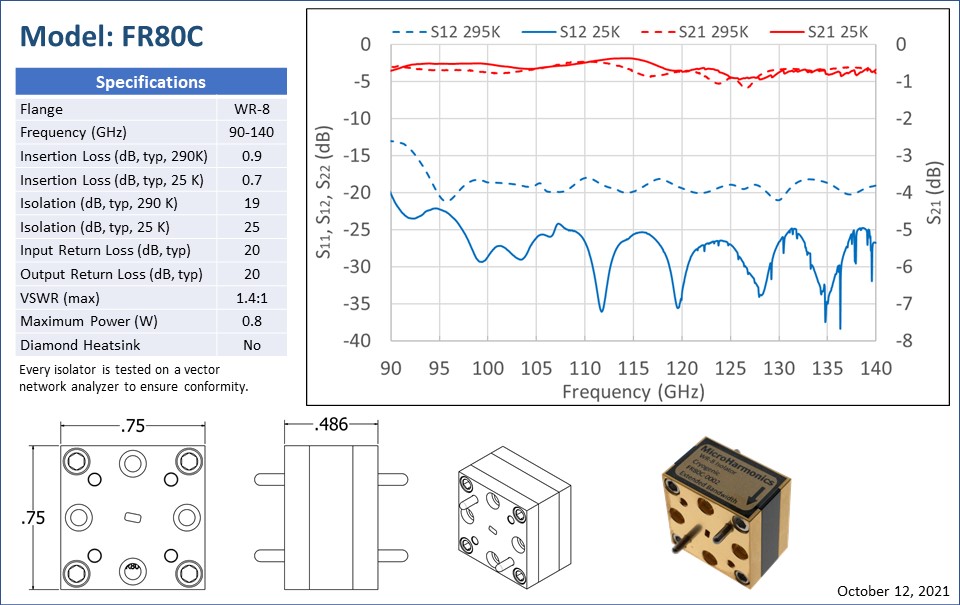 Micro Harmonics is a member of the Cryogenic Society of America.

Interested in purchasing our products? Email us using sales@mhc1.com or refer to our contact information linked below.

For more information concerning our product lines, white papers, and informational videos follow the link below. 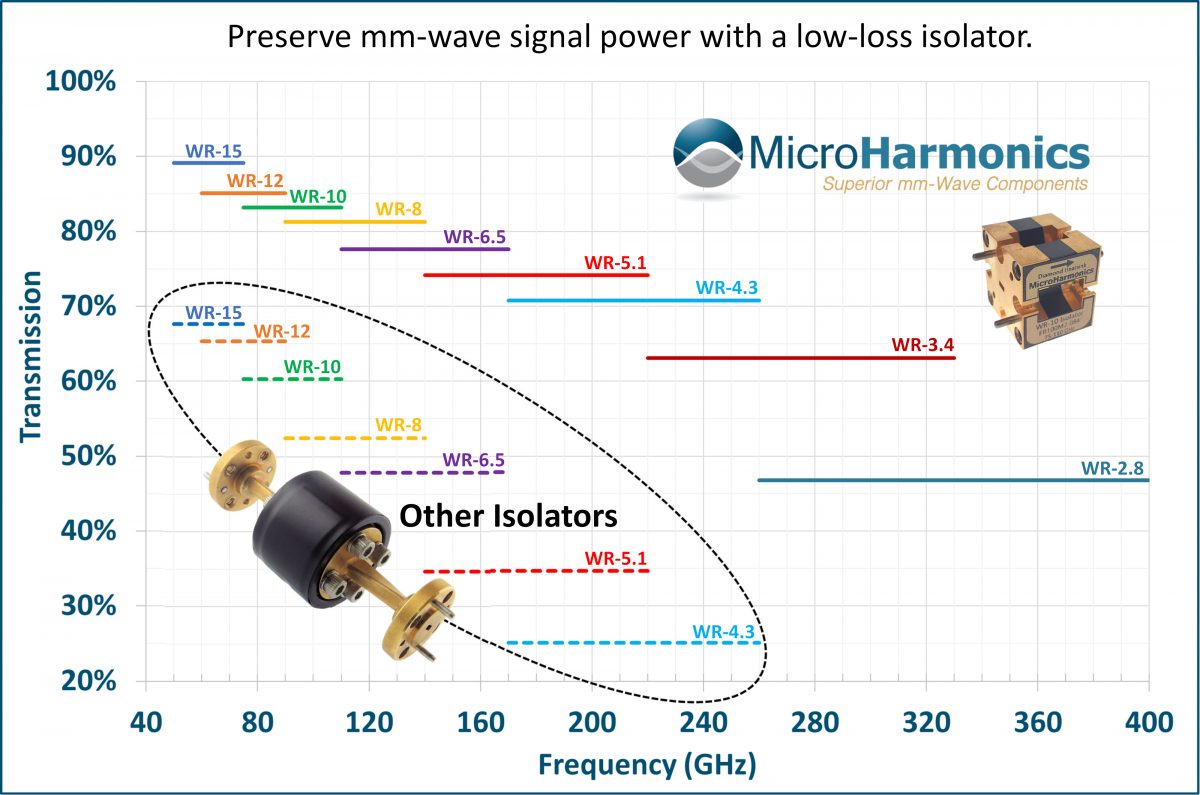 At the heart of a Faraday rotation isolators are a pair of alumina cones and a cylindrical ferrite core. The cones are used to couple EM fields from the waveguides to the ferrite. The cones are bisected by a resistive layer along their central axis. In most commercial Faraday rotation isolators, the ferrite and cones are suspended by a pair of washer-shaped supports as shown in the sketch below. The cone/ferrite assembly is inserted through the inner holes in the supports and then attached with a non-conductive epoxy. The support material is typically BOPET, polyimide, styrene, a resin or some other material with a low dielectric constant and low loss at millimeter wave frequencies. Materials with these characteristics are generally in the class of thermal insulators and thus the cones and ferrite are thermally isolated from the metal waveguide block.

Power entering the output port of the millimeter wave isolator is absorbed in the resistive layer bisecting the input alumina cone. The absorbed power is converted to heat energy. Very little of this heat energy can be channeled away by thermal conduction through the supports, rather it must be dissipated through a radiative or convection process. The resistive layers are thus subject to high heat levels and even damage. Historically this was not an issue as there was very little power available at these frequencies. But as higher power sources are becoming available there is a renewed interest in the power ratings of these devices.

At Micro Harmonics we have replaced the input support washer with a uniform highgrade optical CVD diamond disc. Diamond is the ultimate thermal conductor approaching 2200 W/mK, more than five times higher than copper. The graphic below shows an exploded view of the millimeter wave isolator core to give a better view of the constituent parts (ferrite, cones, supports and absorber). The absorber inhibits excitation of higher order modes in the highly over-moded cavity. The diamond disc is sandwiched between the base of the input cone and the ferrite (left most support disc). The diamond disc is in intimate contact over the entire area of the cone base as shown in the graphic below. This is the optimal location since it is the region subject to the highest heat levels.

The assembled isolator core sits in a machined waveguide block as shown in the graphic below. The waveguide block and waveguide isolator core are split in half to allow a view of the interior. Magnetic armatures are also shown in the sketch. The armatures are used to focus the magnetic bias field from rare earth magnets onto the ferrite. The diamond disc is attached to the metal waveguide block over its periphery. The diamond is in intimate contact with the input cone and the metal waveguide block and thus it provides an excellent conduit to channel heat away from the resistive layer. The red arrows indicate the path of heat flow. Even at low reverse power levels, our millimeter wave isolators should consistently run cooler with reduced thermal stress on the resistive layer and epoxy joints. 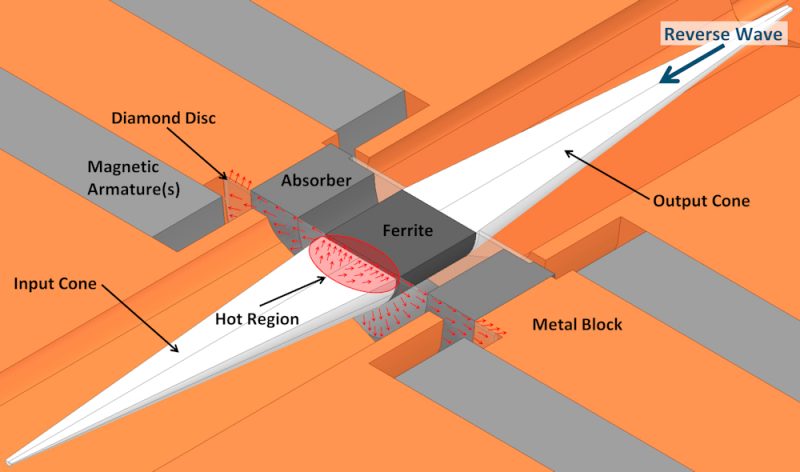